Too rich for its own good.. 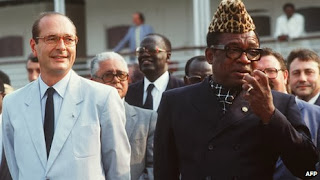 Mobutu, pictured with Jacques Chirac, was courted by the West for decades
Dissidents were tortured or bought off, ministers stole entire budgets, government atrophied. The West allowed his regime to borrow billions, which was then stolen and today's Congo is still expected to pay the bill.
In 1997 an alliance of neighbouring African states, led by Rwanda - which was furious Mobutu's Congo was sheltering many of those responsible for the 1994 genocide - invaded, after deciding to get rid of Mobutu.
A Congolese exile, Laurent Kabila, was dredged up in East Africa to act as a figurehead. Mobutu's cash-starved army imploded, its leaders, incompetent cronies of the president, abandoning their men in a mad dash to escape.
Mobutu took off one last time from his jungle Versailles, his aircraft packed with valuables, his own unpaid soldiers firing at the plane as it lumbered into the air.
Rwanda had effectively conquered its titanic neighbour with spectacular ease. Once installed however, Kabila, Rwanda's puppet, refused to do as he was told.
Again Rwanda invaded, but this time they were just halted by her erstwhile African allies who now turned on each other and plunged Congo into a terrible war.
Foreign armies clashed deep inside the Congo as the paper-thin state collapsed totally and anarchy spread.
Hundreds of armed groups carried out atrocities, millions died.
Ethnic and linguistic differences fanned the ferocity of the violence, while control of Congo's stunning natural wealth added a terrible urgency to the fighting.
Forcibly conscripted child soldiers corralled armies of slaves to dig for minerals such as coltan, a key component in mobile phones, the latest obsession in the developed world, while annihilating enemy communities, raping women and driving survivors into the jungle to die of starvation and disease.
A deeply flawed, partial peace was patched together a decade ago. In the far east of the Congo, there is once again a shooting war as a complex web of domestic and international rivalries see rebel groups clash with the army and the UN, while tiny community militias add to the general instability.
The country has collapsed, roads no longer link the main cities, healthcare depends on aid and charity. The new regime is as grasping as its predecessors.
I rode on one of the trainloads of copper that go straight from foreign-owned mines to the border, and on to the Far East, rumbling past shanty towns of displaced, poverty-stricken Congolese.
The Portuguese, Belgians, Mobutu and the present government have all deliberately stifled the development of a strong state, army, judiciary and education system, because it interferes with their primary focus, making money from what lies under the Earth.
The billions of pounds those minerals have generated have brought nothing but misery and death to the very people who live on top of them, while enriching a microscopic elite in the Congo and their foreign backers, and underpinning our technological revolution in the developed world.
The Congo is a land far away, yet our histories are so closely linked. We have thrived from a lopsided relationship, yet we are utterly blind to it. The price of that myopia has been human suffering on an unimaginable scale. 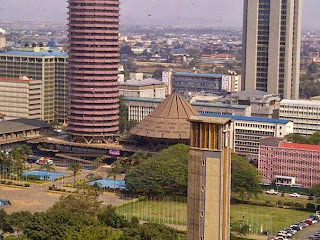 I've really enjoyed spending the last few weeks in Kenya. I like Nairobi a lot and going forward, this is a place I intend to visit as often as I can. My holiday is coming to its end, and in a few hours I should be on an aeroplane ferrying me back to Europe; first to Paris, France and then onward to London; back to the drudgery of life in England, the stony and expressionless faces of the people you encounter on your daily commute; that cold, dull and dreary weather. Whatever one says about Africa, it remains the case that in the overall, people in Africa are happy; and certainly happier than people in Europe! I will miss Kenya and Nairobi in particular.

But of course there are other things that have to be said, issues that I have found particularly unpleasant. Class, is more of an issue in Kenya than it is anywhere else I've been to, except Brazil. With Brazil's history though, the wideness of the gap in the social hierarchy is explainable with a measure of rationality. Much less so with Kenya.There simply is no reason (save for greed and selfishness) why, for example, one kilometre from the splendid, clean and well maintained Central Business District (CBD) of Nairobi, is located Africa's largest slum, Kibera, where more than 2 million of Nairobi's inhabitants live, a significant proportion of the city's population.

Kibera is only one of several slum areas in the city. Indeed much of Nairobi is slummy, even those other areas such as Eastleigh, Juja Road and other such places that are not officially designated as slums. Its particularly bad because these slummy areas are largely neglected, almost as if the inhabitants (usually the poorer lower classes) are insignificant and irrelevant. Street cleaning, for instance, takes place only in the CBD and in those plush highbrow parts of town where well-to-do Nairobians live. Poor people, it seems, are not worthy of having their streets cleaned. 200 metres outside the CBD and every street corner is piled high with rubbish (garbage as my American friends will say), because, of course, there are no upper-class people resident in the vicinity. I have found it deplorable.

The society's sharp class distinction also means that there is much resentment between the classes. Being class-neutral myself, I have found it easy to hold conversations with all kinds of people. Indeed, the most interesting chats I've had since I've been in Kenya, have been with two separate individuals; one, Simba, a security guard and the other Moses, a bus conductor. Its interesting to see how truly insightful some of these so called "lower-class" people can be. But its the deep resentment that I observed which has touched me the most. In the aftermath of the Westgate Mall tragedy, I got the distinct feeling that there were quite a few among the lower classes who have little sympathy for the unfortunate victims of the terrorists. "Only well-to-do upper-class people could afford to visit Westage after all, so what did it matter if they died?" Quite troubling, I thought.. — in Nairobi, Kenya.
Posted by Anengiyefa at 9:51 pm 3 comments: