Now I've started this blog, I can't seem to get enough of it. OK, I admit its 3.10am and I'm seated in front of my computer listening to Kassav's zouk; and I wonder why....I try to convince myself that its OK, its Saturday today. I can hug my bed until noon if I wish. But hey, who is being fooled here? I'm seated in front of this blasted screen in the middle of the night not because I really want to, but because there's nothing more interesting for me to do. So I thought what the heck, I might as well pour out my frustration on this blog. That's what its here for isn't it?
The last vestiges of what I thought was a love live evaporated in a puff of smoke on Valentines day. I didn't even get a text from the direction where it was most desired. I resolved on that day to terminate what I'd thought was a relationship, one which had existed for just over a year. The fact that I don't miss the relationship as much as I thought I would, is proof that I made the right decision. I guess I was just holding on. I did get a message the next day apologising for Valentines day, but there are only so many apologies that a man can tolerate. Enough was enough and the time had come to move on. But then, move on to where? I think now I'm beginning to understand why some people stick to a bad relationship for fear of finding themselves single again, at a point in life when they really shouldn't still be looking. But when the person you love doesn't love you enough even to make the effort to send you Valentines day greetings, then perhaps you're right to consider your position regarding that relationship. Anyway, I'm single again and I find myself enjoying the luxury of being up at 3 in the morning. (Am I really?) I find that I am thinking about myself and my life more. I even have the time to start a blog.
So what is it about guys? Why do most of us have this ingrained propensity to be promiscuous? On Valentines day I saw M online on the site where we met in the first place, so I know M wasn't sick, which was the excuse I was given. I had always suspected infidelity on M's part anyway but was willing to tolerate it, insofar as it did not affect us. I was warned, but I suppose I must have been blinkered by what I thought was love. A new chapter started on Valentines day. I feel lighter and there is a new-found spring in my step. That relationship was more of a burden than anything else and I almost feel a sense of relief that its over. Don't worry, I'll keep you posted how I progress...:)
Posted by Anengiyefa at 3:11 am 5 comments: 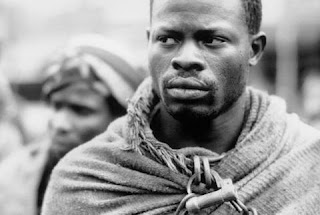 Errm, yes, I know you know who he is. I'm not impersonating him, or even attempting to. I'm just trying to win for myself the position of 'biggest fan'. Trust me, there can't be too many in whose minds he looms as large as he does in mine. His name is Djimon Hounsou. He is the Hollywood actor who was born in the Republic of Benin. He rose to stardom having once been penniless and homeless on the streets of Paris. He is an inspiration for me, quite apart from the fact that I think he is the most attractive man that I have ever set my eyes on. Oh well, you don't have to agree with me. And if you don't, you wont be the first to disagree. But nothing will change my mind about that.

Publicly, I can't say anything other than that I am happy that he and Kimora Lee Simmons are having a baby together, because my private thoughts about their relationship cannot be published safely. Suffice it to say that I am content in the knowledge that he is happy with her. I'm trying hard here to keep from revealing my true feelings about this, so I think its safest to move on at this point...

All week, the computers at the office have been kaput. OK, these computers are the ones that I met at this office when I first joined the firm all those years ago. You would think that after all the good service the computers have offered over the years, somebody would have noticed that they haven't been functioning optimally recently; and that the decision should be taken to upgrade the entire network. Its not a large organisation, so the outlay required is not excessive, considering that without functioning computers no work can be done.
Well, the decision to upgrade/replace the computers was not taken and last Monday, my desktop finally ground to a halt and all efforts to coax it back to life have failed. The next day, my colleague's computer too failed to connect to the central printer, then the printer itself gave one final shudder and came to a standstill. Throughout yesterday, I stood around in my office doing nothing, with work piling up on my desk by the minute. How frustrating is that?
I got to the office this morning and unsurprisingly nothing has changed. So I'm left with deadlines that I am unable to meet, documents to be prepared which I am unable to prepare. Mr Decision Maker didn't even bother to turn up at the office this morning. Now I don't know what to do next. Some people are quite happy to sit around and chat all day long when they're supposed to be working. This doesn't apply to me. I am so angry. I have already had to assuage some irate clients, without letting on what the real problem is. But for how long can this continue, especially since today is Friday and there is a deadline for Monday? I'm just really pissed at the moment..
Posted by Anengiyefa at 1:13 pm 3 comments:

Hi, welcome. For years, I have dragged my feet about starting a blog of my own. This has been because I wasn't able to make up my mind what the theme of my blog should be. My interests are varied and my mind wanders all the time like a butterfly. I haven't found it easy to decide on what exactly I should be blogging about. But suddenly today I have had a brain wave. Surely, I do not have to blog about anything in particular. I can blog about me and my wandering mind. I can talk about the things that bother me, the things that annoy me, the things that make me smile, the things that make me squeal with uncontrollable laughter. Oh my, there is a world out there waiting to be written about. So yes, I have taken up the challenge. Here we go.
Posted by Anengiyefa at 12:46 pm 9 comments: