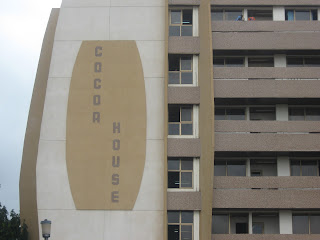 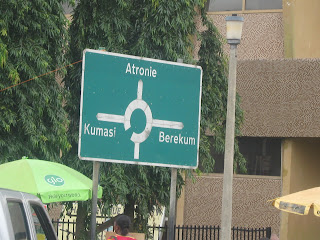 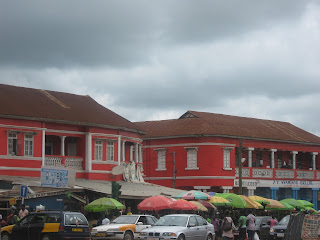 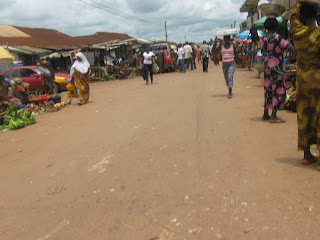 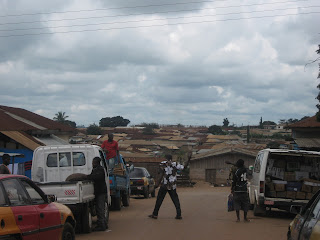 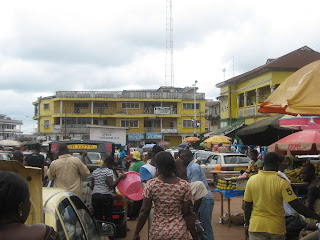 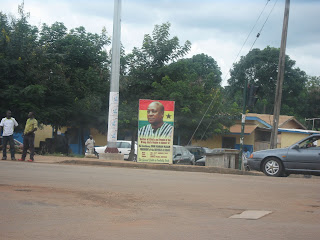 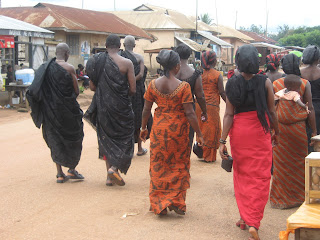 All pics taken this afternoon in Sunyani, the capital city of Ghana's Brong Ahafo Region.
Posted by Anengiyefa at 7:28 pm No comments:

I find that in Ghana people are calmer, less noisy and generally more gentle than people in Nigeria. But the roads in Ghana are just as perilous and the driving just as crazy as in Nigeria. Indeed, Ghana is every bit as chaotic as Nigeria is. So far, I have found one or two bright sparks though. The impressively well organised rest stop on the Accra - Kumasi highway for one, which made a 225km journey that took 7 hours to complete, much less nightmarish for me than it could have been. The highway itself is a good road in the most part, but our progress was severely impeded in those parts of the road that go for miles around the town of Suhum, which are bad, very bad. The person in charge of roads in Ghana really needs to sit up and do something about that road please.

And then there is Kotoka International Airport, whose capacity was practically overwhelmed when three planeloads of passengers arrived within minutes of each other. That airport, in my view, is failing to meet the expectations of those like me who think highly of Ghana, including several foreign visitors who arrived at the same time as I did, and especially those arriving in the country for the first time.

I spent the day yesterday completing the difficult journey by road from Accra to Sunyani in the Brong Ahafo Region, well, only if sitting in a reasonably comfortable air-conditioned coach qualifies to be described as a "difficult journey". :) My tour continues and I expect to be posting updates from time to time or whenever I get the chance..
Posted by Anengiyefa at 10:11 am 5 comments:

Hers is in the only name that I still remember of all the dozens of nurses who cared for me, looked after me and nursed me all those years ago when I was gravely ill and in hospital. And hers is a name that I will not forget, not ever.

For Miwako, I would have been just another one of the multitude of patients that she had the job of caring for. But for me, she wasn't just another nurse. She was different, special, unique; she was my Japanese angel; the one who lit up the room each morning when she entered to wake me, clean me up, change the sheets, tidy up, serve my breakfast and feed me, while soothing and encouraging me at the same time with her sweet voice and calm but warm demeanour.

And then she would prepare me for the day's interminable prodding and probing by the hordes of doctors, consultants, specialists of all shade and hue, many of who would end up sticking one tube or other into almost every available orifice in my by then withered and very ill body. And then those annoying phlebotomists who would turn up with enormous needles, prick my arms and burrow into my emaciated flesh in their daily quest for blood samples, an act which they persisted in until my veins almost totally collapsed in protest! The word 'miserable' does not sufficiently describe how I felt during this very grim episode in my life, an episode that lasted for months.

But through all of this, there was Miwako. She was by no means the only nurse who worked on the ward and the nurses worked in shifts too. So there were long periods when she was not on the ward at all; periods when I longed dearly to see her and have her by my bedside, handling me gently, as was her way. And even on the mornings when she arrived on the ward, (she seemed only to work the day shift, for I have no recollection of having her around during those long, lonely, awful nights), she would enter my room in the midst of a group of nurses with whom she was meant to work together as a team. But even in the midst of her colleagues, Miwako stood out. She was radiant and she shone. And on seeing her, my hitherto crestfallen spirit would lift instantly. And it would seem to me as if it was just Miwako and I in the room, as if none of the other nurses even existed.

Then Miwako would smile at me and in my mind, which obviously was by then quite delirious through illness, I would have extraordinary visions of strolling through the park, hand in hand with a fragrant Miwako, singing sweet songs to her, telling her how good she had been to me. Then I would be rudely brought down to earth and back to the reality on the ward, when I was abruptly shuffled from one end of the bed to the other by the nurses in their bid to change the sheets! But thankfully Miwako would still be there, in the room with me, fussing about, tending to my every need. And by her just being there, strangely, I would feel reassured that I was going to get over this illness and that everything would be alright in the end.

Everything did turn out well in the end, thanks to the expertise of the doctors in whose care I was and thanks to the excellent nursing care that I received. Ten years on, I do not remember the names of any of the doctors, save for the consultant with whom I was required to maintain follow-up sessions after my discharge. I suppose it is a testament to how much of a good nurse Miwako is (or was to me) that I still remember her and think about her as often as I do. I have been back to the ward to express my gratitude to the nurses recently, but the staff were almost all new faces. I would have loved very much for Miwako to know just how much the  kindness that she showed meant to me and how much it contributed to my recovery. I don't know if she'll get to read this, or even if she will remember me at all. But all the same, to all those Miwakos out there who touch people's lives in a special way, thank you.
Posted by Anengiyefa at 5:18 pm No comments: