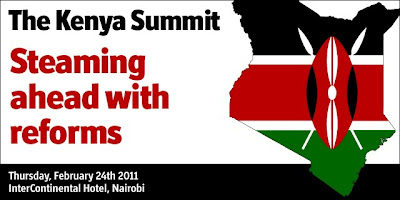 Kenya is vibrant. A new constitution has restored international confidence in the country's stability, and with a Government committed to pro-market reforms, Kenya looks poised to forge ahead as the region's undisputed economic motor. The country's banks, hotels and services far outperform those of neighbouring Tanzania and Uganda, big road-building projects are under way and mobile phone penetration is the highest in the region, all of which make Kenya an appealing environment for international investors.
Yet the country remains a challenging environment in which to do business. Corruption presents major problems, Nairobi remains chaotic despite improvements in infrastructure, and business productivity is still seriously constrained by a skills deficit.
Economist Conferences' Kenya Summit will bring the country's leaders face-to-face with an audience of international investors and senior business executives for one day of frank analysis of the challenges facing the country as it seeks to develop its industrial potential.
In discussions led by The Economist, the questions at the top of existing and potential investors' minds will be tackled, and the policy plans of the Government will be scrutinised. Also, answers will be sought from those responsible for delivering the comprehensive reforms programme which the country needs.
Information on The Economist Debate which took place in Nairobi, Kenya in October 2010 can be accessed here.
For more information the person to contact is Karen Levent, Marketing Manager at karenlevent@economist.com

Taken from here.
Posted by Anengiyefa at 6:25 pm No comments:

Hello everyone, there has definitely been a break or interruption in the continuity of this blog. Please bear with me. I will be back soon. Cheers..
Anengiyefa
Posted by Anengiyefa at 1:04 pm 2 comments:

One per cent of Ghanaians are gay or lesbian..

More than 200,000 people or one percent of Ghana's adult population regard themselves as gay or lesbian according to a study. The data has been collected by the Ghana Household Survey (GHS).
100,000 individual respondents to the survey provided the biggest pool of Ghana social data after the national census, the statistics service said.
95 per cent of adults identify themselves as heterosexual/straight, while just one percent of adults see themselves as gay or lesbian. Another 0.5 per cent of adults said they are bisexual and a similar proportion described their sexuality as 'other'. Just under 3 per cent of adults responded "don't know" or refused to answer the question. Fewer than one per cent of respondents provided no response.
The highest proportion of adults who identified as gay, lesbian or bisexual were in Accra, Takoradi and Kumasi with the lowest found in Tamale.
Taken from here.
For more on homosexuality in Ghana click here.
Posted by Anengiyefa at 2:36 pm 3 comments:

A silent issue..
Posted by Anengiyefa at 12:47 am No comments: