When we legalise discrimination.. 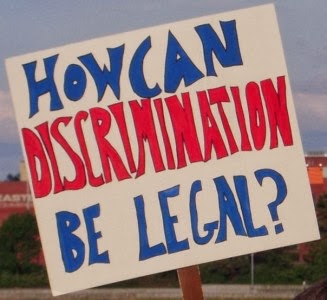 When a law such as the Same Sex Marriage Prohibition Law recently passed in Nigeria is met with the kind of widespread support within Nigeria that we have seen, we know for sure that Nigeria is in deep, deep trouble. This is a country now firmly on its slide down the slippery slope of repression and discrimination against a segment of its own citizens.

As a diversionary tactic, this law has been an unmitigated success so far. It has diverted the minds of long-suffering Nigerians from the real issues; the poor quality of life for its citizens which the country's successive governments have made sure to maintain for decades, the lack of security, the lack of basic services and amenities that are taken for granted by the populations of most of the other top-50 largest economies of the world, of which Nigeria is one. (Nigeria is the country with the 37th largest GDP in the world, according to the United Nations, The World Bank, the IMF and the CIA Fact Book, all authoritative sources.) It is also the only country, which, although clearly regarded as a wealthy country, has nearly 85 percent of its population living on less than $2 per day and classed as a Low Human Development country in the UNDP's Human Development Index, lower even than the Republic of Congo and Tanzania. (See the 2013 HDI Report here).

Respecting the law is not what Nigerians are known for, (it would be hard to disagree with me on this). The presumption, therefore, that this law is likely to be badly abused is not unfounded. If anything, this is a highly likely outcome, and more so given that the law's application extends to non-homosexuals who are alleged to be associated with suspected homosexual persons. I foresee widespread abuse. I predict situations where scores are settled between adversaries with allegations relating to homosexuality being wildly slung about and the myriad consequences of such, of the sort that we cannot now even begin to imagine. In short, this is a very bad law. It is a law that allows for Nigerians to be arrested on the streets on the mere suspicion that they may have homosexual associations. I personally, feel nothing but shame at this point in time, for I am connected with a country that promotes and upholds such hate, ignorance, intolerance, bigotry and prejudice.

I will conclude with this very apt posting by someone on Facebook:

"For 50 years, Nigeria has been undermined by violence and rampant graft. Their solution? Bash harmless gay people.
Barely a day after they started their anti-gay witch hunt, Boko Haram launches a major bomb attack. Glad the Nigerian regime is focusing on the real danger, the gays!" - Brian Farenell

I came across the following in today's Premium Times, a progressive Nigerian publication.

"We, the undersigned, wish to ally ourselves with these voices of reason. We unreservedly condemn the Same Sex Marriage Prohibition Law and urge civil society and human rights groups to start a campaign that we hope will soon result in its abolition.
We also urge the eminent personages across the world who have condemned the so-called law to go beyond diplomatic gestures and put pressures on the Nigerian government wherever they can. Specifically, the United States and the United Kingdom should, forthwith, impose diplomatic sanctions (e.g., denial of visas) on all Nigerian functionaries, including journalists, the clergy, and policymakers associated with the passing of the law.
There are many reasons why every right-thinking person should oppose this law.
First, it is based on a spurious, uninformed and one-dimensional reading of ‘African culture.’ Second, it criminalizes a section of Nigerians for nothing other than their natural sexual inclination.Third, it ignores the fruits of many decades of scientific research which proves decisively that homosexuality is as natural as heterosexuality. Fourth, the law threatens to reverse the gains made by programs aimed at fighting the HIV-AIDS epidemic in the country.Fifth, it is absurd in terms of the jail time it stipulates for those who associate with LGBT people. Sixth, it casts Nigeria in a bad light for no good reason, putting it in the vulgar company of other countries where homosexuality is criminalized.Seventh, it gives law enforcement agents an open check to go after innocent Nigerians in the name of upholding the law. Finally, the law impinges on Nigerians’ freedom of speech and association, and expressly violates the rights of minorities in a free and democratic society.
It is not the business of any state, let alone the Nigerian state, to interpose itself in the private affairs of two consenting adults. Any human act or practice that does not infringe on the freedom of others cannot and should not be criminalized. Homosexuality does not harm us as a society and people. It is the hypocrisy, venality, and corruption that pervade our society that are the source of our problems.
Signed:
Ebenezer Obadare, Lawrence, Kansas, USA; Akin Adesokan, Bloomington, Indiana, USA; Wale Adebanwi, Davis, California, USA; Lola Shoneyin, Abeokuta, Nigeria; Jude Dibia, Lagos, Nigeria; Jeremy Weate, Abuja, Nigeria; Chido Onumah, Abuja, Nigeria; Amatoritsero Ede, Ottawa, Canada; Mojubaolu Olufunke Okome, Brooklyn, New York, USA; Olufemi Taiwo, Ithaca, New York, USA; Tejumola Olaniyan, Madison, Wisconsin, USA; Ike Anya, London, UK; Kunle Ajibade, Lagos, Nigeria,; Moradewun Adejunmobi, California, USA; Sean Jacobs, Brooklyn, York, USA; Adeleke Adeeko, Ilorin, Nigeria; Olakunle George, Providence, Rhode Island, USA; Wendy Willems, London, UK; Ikhide R. Ikheloa, Maryland, USA; Rudolf Okonkwo, New York, USA; Jide Wintoki, Lawrence, Kansas, USA"

Posted by Anengiyefa at 2:56 pm No comments: