Activist and head of Catholic Diocese of Sokoto State, Bishop Matthew Hassan Kukah, has declared that the reality of undervelopment is catching up with Northern Nigerian in comparison with the South.
Kukah was speaking on “Power without authority: Leadership crisis in Nigeria”, at a Nigerian Leadership Initiative (NLI) lecture in Abuja. 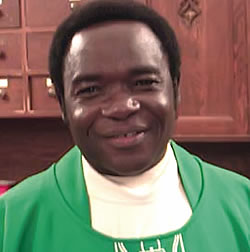 In a summary of his speech SaharaReporters obtained in Abuja, Kukah said that the North has so many challenges of development and it is “daybreak because the reality of the situation is obvious.”


He said while Nigeria has consistently produced office-holders, it has not produced leaders, as different people have assumed control by accident, and without preparation.
He also observed that while the problems of this nation were not caused by President Goodluck Jonathan, it is remarkable that the rot that is being dug out in the National Assembly is happening during his time.

Turning specifically to the North, he said, “Clearly, my message for my brothers and sisters in the north is to ask ourselves, ‘what is happening?’” he said.  “And the north must also appreciate the fact that the return of government to the north in whatever shape or form is not going to solve our problem, and will not be the solution to the problem. And it’s daybreak, because the reality of the situation is obvious. This is where I feel quite disappointed by some of the utterances I have heard. I heard somebody like Alhaji Adamu Ciroma saying that the problem now is that: ‘we need a Danfodiyo to come.’”

He urged Nigerians not to give up.  “There is hope in Nigeria. I am a Bishop, I market hope. But let us be realistic, what I have seen in the Southwest. The Southwest states have developed a roadmap of where they are heading- a critical question I ask myself is: where is northern Nigeria? The north has literally and increasingly perceived to be a liability to the rest of Nigeria.

“The whole notion that somehow, by some dysfunctional philosophy, we can still line up and say: it is our turn to govern Nigeria, that is not the way the rest of the world is going. I appeal to us to appreciate the fact that the problems of this nation were not caused by President Goodluck Jonathan. But I think what is also quite fascinating is that the rot that is being dug out in the National Assembly is happening during his time.”

“Nigeria has consistently produced office holders but not leaders. Nigeria has produced through different processes, men and women who came to power and office largely by accident. Check out the list: Tafawa Balewa-Ironsi-Gowon-Murtala-Obasanjo-Shagari-Buhari-Babangida-Shonekan-Abacha-Abdusalam-Obasanjo-Yar’adua-Jonathan. None of these great men came to office with any degree of preparation or experience in governance.
Analysing the patterns of ascent to power in Nigeria, he noted that only four of the eight Nigerian Heads of State have been civilians. “The others have come to power through military conspiracy and coups. There is hardly anyone who has not come to power through very controversial circumstances, framed in allegations of electoral fraud and so on. If truth were told, these circumstances of accident and chance in coming to power have taken a toll on issues of authority and legitimacy. Good governance relates to the strategies and mechanisms adopted by state for the delivery of public, social and political good. The duty and responsibility of every state is to deliver these services to its citizens or those who legitimately enter its territories.
Bishop Kukah then offered the following questions about the nature of the Nigerian polity today.  “Can the nation’s apparatus of security contain internal threat and dissent? Do citizens feel secure as individuals, families or communities? Do they feel secure in their homes, their places of work or worship? Are their properties protected either by the state or other mediating agencies? Do the security agencies enjoy respect and co-operation among the citizens? Do citizens enjoy protection under the Constitution? Has a culture of transfer of power by constitutional means become acceptable in the country? How does the country’s legal system work? What again, is the cost of justice and do citizens generally feel that the law protects them? How do individuals, families and communities assess the rule of law? How much does justice cost the weakest members of society? Are all citizens equal before the law? Do citizens understand the constitution as a secular document with a sacred ring to it? Does the government respect Court judgment?”
Reblogged from Sahara Reporters
Posted by Anengiyefa at 5:49 am

Hi Anengiyefa
What is your opinion on the situation? This would be 100 times more interesting than that of Bishop Kukah.

I sent you an e-mail

Yes, I've seen your email and I have replied to it. Thanks. The contents mirror my thoughts exactly.